Today I’d like to show you a social media strategy that is working well right now. First a little background about the niche that I’m using as an example…

As you may know, my wife and I have six children. Because of this, I’ve been privy to an interesting niche market known as “baby wearing”. Baby carriers seem to exist in all cultures, and have probably been around since the very first baby. It’s a great invention, enabling you to carry a baby or small child while freeing up your hands to perform the tasks of daily life. 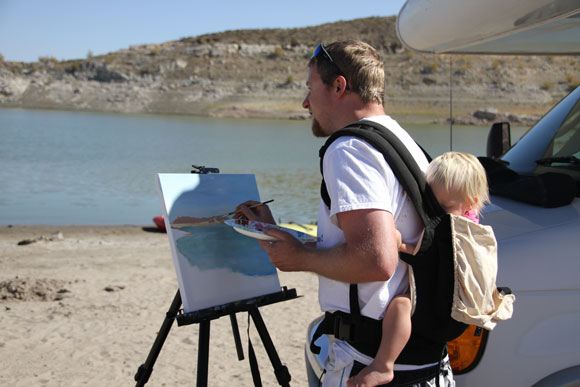 Me using a baby carrier while painting.

There are countless types and varieties of carriers including wraparound slings, ring slings, pouches, front-packs, back-packs, mei tais, and other soft structured carriers. To an outsider, such products may seem utilitarian, but to modern moms they’re oh-so-much-more. A baby carrier can be a fashion statement, comforter, hobby, collectible, status symbol, fitness accessory, and basically a way of life. The customers in this market have money, and they often buy multiple baby carriers.

One of my wife’s favorite baby carriers is the Sakura Bloom sling. Through my wife’s interactions with this company, I’ve been able to observe some great marketing in action. First I must say it’s a great product. Developing a great product is key #1 for a successful business.

Sakura Bloom’s website (sakurabloom.com) is pretty simple and typical for an e-commerce site. Where they shine is the community that they’ve built on social media; particularly Facebook and Instagram. 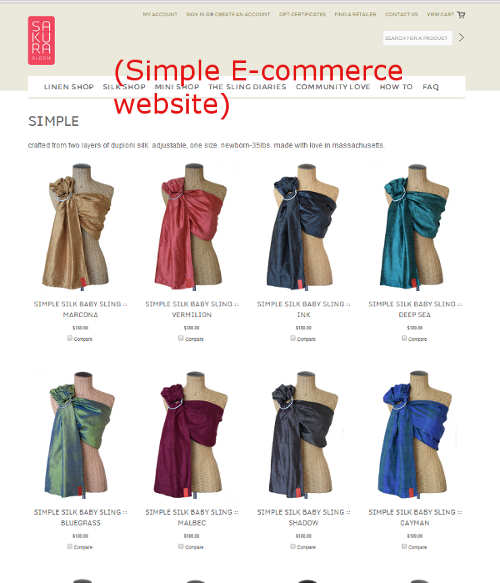 A perusal of their Twitter and Pinterest accounts shows a modest following of over 4,000 on each. They’re getting some decent interaction there, but nothing that’s going to make a huge impact. Apparently they decided to skip the video revolution altogether and basically abandoned their YouTube channel four years ago after posting several videos between 2007 and 2010.

It’s the community that they’ve built on Facebook and Instagram that seems to be driving a lot of traffic and sales. With over 100k likes on Facebook and over 40k Instagram followers, the numbers are pretty good. As always, the money is in the list. But we also know it’s not about the size of the list, it’s about the interaction and relationships. These days they’re getting an average of a couple hundred likes on anything they post on Facebook, and 500+ likes on each Instagram post which shows a high level of interest and interaction with their followers. Instagram is really the heart and soul of their current social media efforts, with many of their Facebook posts simply reposted from Instagram. 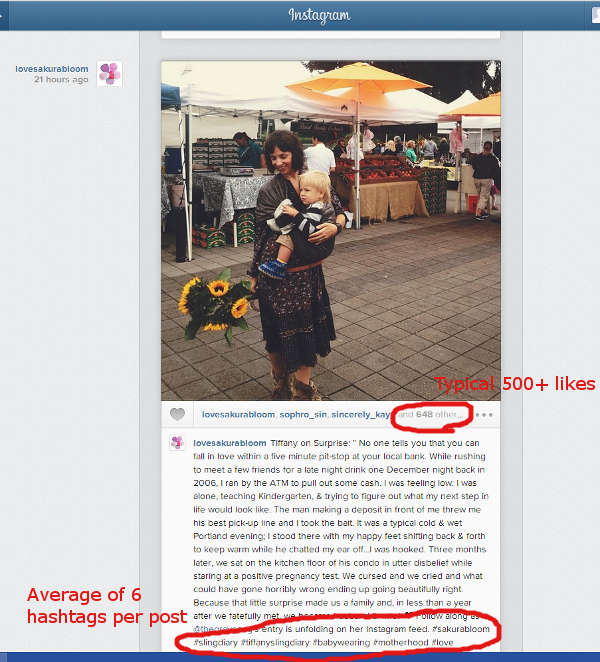 The question is how has Sakura Bloom fostered this level of participation on Facebook and especially Instagram?

The answer is the content that they post has created a virtual culture. Their targeted audience is drawn toward and into this culture and they want to be a part of it. In this case, it is a culture of beauty. There are several hallmarks within their culture, such as value placed upon babies, breastfeeding, simplicity, freedom, travel, and yoga. But the defining feature of their culture is a certain brand of motherly beauty, often ethereal, and often seen through the nostalgic filters of Instagram.

Consistency is key in creating such a culture. If you look at the featured photos on Sakura Bloom’s Facebook and Instagram channels, they all fit within a mode. As a company, they choose which photos best match their culture/brand, and the participants of the culture have adopted the same mode, thus contributing photos that fit within the culture. I have no idea how much (if any) of this is intentional on the part of this particular company. Regardless of whether it just happened that way organically, or whether it’s intentional, the lesson is still the same: consistency is key. 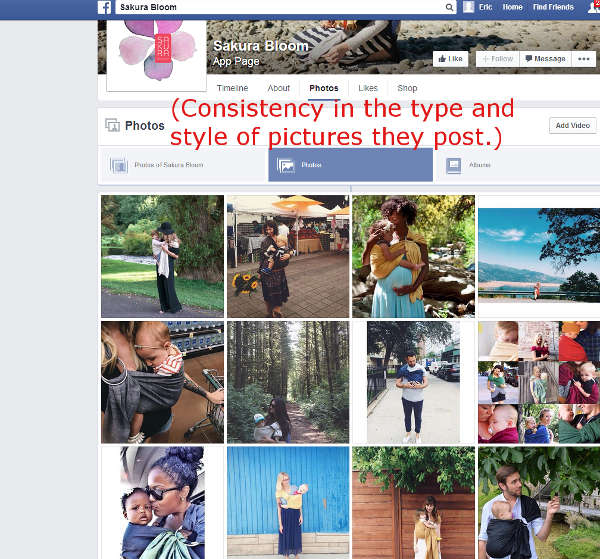 A prime example of this is their “Sling Diaries” feature. Here’s how it works. Sakura Bloom enthusiasts audition to become a “sling diarist” by posting an Instagram picture and/or blog post, typically featuring a Sakura Bloom product, and possibly accompanied by an artsy write-up. Sakura Bloom then chooses a handful of official sling diarists who will make a series of sling-related posts over the course of six months. They’re now on the fifth go-around of this, and you can see the most recent batch of sling diarists highlighted on Sakura Bloom’s Pinterest account. 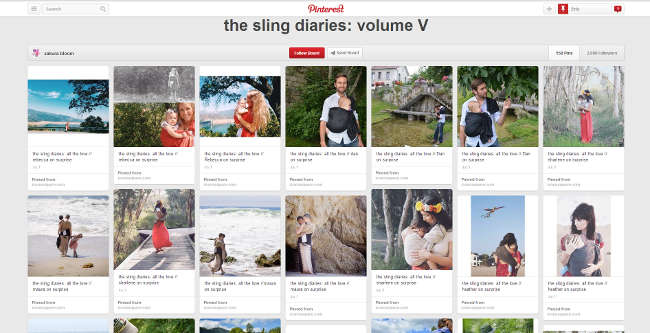 It’s a brilliant concept that can be applied to a wide variety of niches and business models. Your best fans create content for you and advertise your product, and in return you give them recognition and virtual kudos. If I were to do something similar in connection with Eric’s Tips, I could call it the Web Business Diaries. I could have a contest in which I recruit a handful of my subscribers who would like to be featured as they document their business-building process. They would get recognition and exposure from this blog, and I would get an exponential amount of exposure from their blogs and/or social media feeds as they documented their progress.

Next, Sakura Bloom has harnessed the use of hashtags to bolster interactivity within their community, while drawing in new prospects from the outside. In analyzing their previous 20 posts, I found they use an average of six hashtags every time they post anything on Facebook or Instagram. To an Internet marketer like me, hashtags seem like a fad from 2009, but apparently they are more effective than ever. With the recent popularity of the ALS Ice Bucket Challenge, it seems that a whole new level of the global population has been awakened to hashtags. They’ve learned they can click on the #icebucketchallenge hashtag, and voila… they can instantly see hundreds of others who are posting their ice bucket videos, in real time.

In addition to the interactivity generated by posting generic hashtags such as #babywearing, Sakura Bloom has done a great job of popularizing “branded” hashtags within their community. For example, hashtags like #sakurabloomstyle, #sakurabloomwheat (each product/color has its own hashtag), #sakurabloombigkid, #sakurabloomhiking, and #sakurabloomsummer enable Sakura Bloom to perpetuate their brand while giving their fans an easy way to connect with each other and be seen by the community. In other words, if you use the hashtag #sakurabloomstyle you can be sure your post will be seen by Sakura Bloom management, and a bunch of other Sakura Bloom followers. Sometimes they will declare a “hashtag of the day”, which results in a flurry of activity.

Sakura Bloom has also used hashtags to run contests. For example, they recently hosted a “flat lay” competition (a flat lay is a collection of items, such as an outfit, laid on a flat surface… in this case containing a Sakura Bloom sling). To enter the contest, participants posted a flat lay picture on Instagram along with the hashtag #sakurabloomflatlay. Sakura Bloom gave out gift certificates of $300 for first place, $200 for second, and $100 for third. The result was hundreds of beautiful flat lays posted in a matter of days, all essentially advertising Sakura Bloom. If that were the totality of it, it would be advertising money well spent. But they smartly dovetailed the contest into the release of their new fall product line, which likely contributed to a successful product launch. 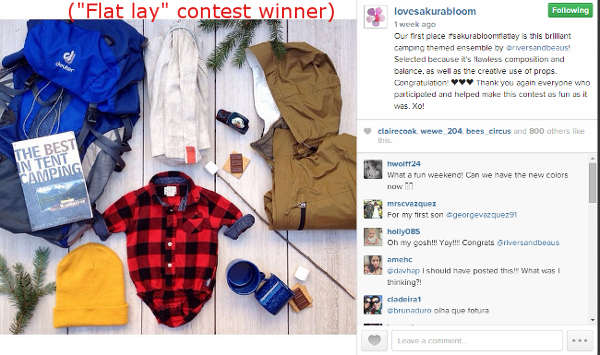 All of the above is a precursor for how they were able to generate $9200 of sales in five minutes (the prerequisites were creating a great product and a community of rabid fans). A couple months ago, they announced a limited edition “premium” version of their product– a one-of-a-kind sling tie-dyed by a renown fabric designer named Shabd. They created instant buzz within their community on Facebook and Instagram. This limited edition product was positioned as the epitome of beauty within their culture of beauty, which generated massive desire. The scarcity factor pushed the desire level higher due to the exclusivity (being a part of something exclusive), and the fear of missing out (FOMO in marketing speak). The limited edition of 18 sold out in 18 minutes. My wife got one 🙂

So five weeks later they came out with another limited edition of 20. They posted a teaser just one day before the launch. On the morning of the launch, they announced a contest: re-post an ad for the new product using a certain hashtag, and you’d be entered to win a $500 gift certificate. This guaranteed that their community would quickly learn about the launch scheduled for 3:00PM that day, and would stir up a frenzy of desire. When the sales page went live, they sold out of the 20 units in 5 minutes at $460 a piece! 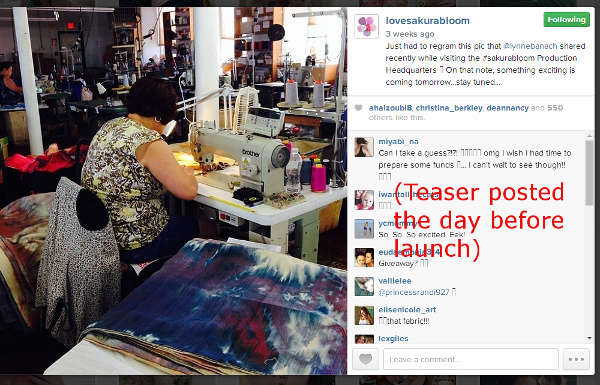 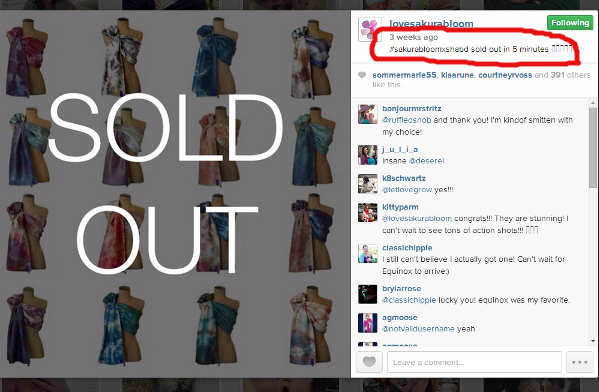 Of course we’re talking about a physical product here, so there were expenses on their end. However, while those 20 units sold out in 5 minutes, I can make an educated guess that they had an influx of additional sales of their other products following the launch. One factor is that there were a lot of potential buyers who missed out on the 20 units, who may have chosen to buy something else. The other factor is that the limited edition slings were more than twice as expensive as their standard silk slings, and almost 5X the cost of a linen sling, so we can reasonably assume that the buzz and traffic for the launch also brought in some customers who were unable to afford the limited edition, and they purchased something less expensive. It’s speculation on my part, but I’d be willing to bet on it, and I’d certainly advise other online retailers to experiment with similar promotional strategies.

Whether you’re selling physical products or digital goods, I hope you’ve gleaned a few helpful tips from this case study. One thing I want to emphasize is that the strategies I’ve explained here are simple! While the methods involve the technology of social media, the principles are timeless. These are things that you CAN do…

1) Look for a market with rabid fans and hyper enthusiasts.

2) If your consumer product seems rather utilitarian, consider whether it could be made more beautiful and desirable. How could you shift the paradigm from useful to cool, chic, and stylish? (Obviously this doesn’t work for all products)

3) Focus on engaging your market in the communication channels they most frequently use. (YouTube, Instagram, Cable TV, local meetings… go where they are.)

4) Use social media to create a culture that attracts your target market. Consistency is key.

5) Use hashtags liberally (and encourage participants to do the same) to attract additional prospects from the outside.

6) Encourage your customers to create content surrounding your product/brand, and give them reasons to do it. (This results in social proof)

7) Use contests to ramp up the enthusiasm and dovetail into promotions and product launches.

8) Use scarcity to invoke desire and create a buying frenzy.

As always you are welcome to leave your questions and comments below.