I spent the day at the Detroit Zoo today with my family (we’re still visiting relatives in Michigan), and we had a great time.

It was a bit crowded due to about 100 schools that just so happened to plan their end-of-the-year field trip on the same day, but the mass of humanity just added an extra dimension to the entertainment of “animal watching”.

I’m telling you the truth when I say I saw a group of 2nd-graders communicating with the Snow Monkeys in their own language. The kids started making monkey sounds and then all the monkeys ran over and started talking back…it was hilarious!

As we wandered through one of the largest Polar Bear exhibits in the world, we entered several rooms with underwater windows to see the Polar Bears and seals from below the surface. 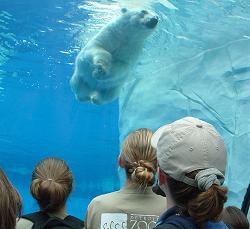 As we drew near the end of the exhibit we entered one last room which appeared to have a different angle for viewing. When we entered the door we found ourselves not in an exhibit room, but in a gift store (with a view). It was not apparent from the entryway, but once inside, we had to walk through the merchandise to get to the window for viewing.

It was evident that some very thoughtful marketing had been done, and the experience reminded me of some important principles to keep in mind when doing a “one-time-offer” or upsell online.

First of all, let’s look at the timing. It came at the end of the tour. AFTER we had been through the exhibit and seen the Polar Bears. At that moment in time, we were excited about Polar Bears, so it was the perfect time for the offer. You can do the same thing by presenting one-time-offers after visitors view certain content, or sign up, or place and order. Hit them at the time they are most excited about it.

Next let’s look at the placement. We HAD to walk through the merchandise to get to the view. Don’t be afraid to put up a road-block and “force” your visitor to view your offer. If they’ve just signed up or made a purchase, you have their attention. Seize that opportunity.

Lastly, let’s look at the content of the offer. Guess what the gift shop was selling? Elephant souvenirs? No! They were selling Polar Bear stuff of course. They had Polar Bear art, clothing, and a number of other Polar Bear paraphernalia. What does this teach us? Keep it relevant. If your customer is excited about buying something regarding a certain topic, don’t present them with an offer for an unrelated topic.

As always you can leave comments here in the blog.

4 comments on “A Lesson From The Zoo”