This is the follow-up to my recent State of Twitter Part 1 post, in which I talked about the growth of Twitter, its proliferation in the media, and my decision to give it a try.

This post is to report the results of the survey, along with my observations and a few opinions throughout.

The participants were mostly members of my Eric’s Tips newsletter. However, I also publicized it to my facebook friends, and it was re-tweeted by a few people which brought in some diversity as well.

But overall, I’d say that 80-90% of the participants were Internet marketers and aspiring entrepreneurs.

There were 927 Twitterers and 610 non-Twitterers.

I started by asking the Twitterers some basic questions about their use of Twitter:

I found it interesting that over 70% of respondents are only tweeting once a day or less. On the one hand I found it somewhat refreshing that my readers aren’t all raging twit-a-holics, but I wonder whether that’s too infrequent to really engage your followers and make your Twittering worthwhile.

Lack of time is probably the reason why most respondents only tweet once a day or less. On the other hand, 118 respondents are spending over 30 minutes a day twittering… that’s a serious commitment. And I think if everyone really kept track of exactly how much time they spent on Twitter-related activities, it would be more minutes than they estimated.

No surprises here. I fully expected this audience to be slanted toward business in their use of Twitter. And indeed 88% are using it for at least some business purposes.

Alright, so not all Twitter users are in love with tweeting, but very few hate it.

For the non-Twitterers, I wanted to know why they weren’t using Twitter, and whether they were paying attention to it…

I was expecting a higher percent to have tried Twitter and quit it (qwitters), but apparently it has a fairly low abandonment rate among marketers. The “not enough time” folks (28.2%) seem to support my theory as to why so many Twitterers tweet as infrequently as they do. But the biggest stat here is the number of respondents who were not familiar with Twitter (44.6%)… and keep in mind that this survey was conducted almost exclusively to an Internet-savvy crowd. This just shows that Twitter is still in the process of breaking into the mainstream and has not yet reached the public consciousness like facebook has. If you were to survey random people on the street, even fewer would know about Twitter. But in another year or two it could be as common as google (hey Twitter’s name has already become a verb, that’s a good sign)… we’ll see.

Note to marketers: Twitter is only effective for reaching other Twitterers. Perhaps that’s part of the reason why many Twittering marketers are passionate about evangelizing for Twitter?

Next I asked several questions about FOLLOWING, because it seems to be the hot topic right now. In fact, last night Ashton Kutcher and CNN became the first users to surpass 1,000,000 followers on Twitter, and others will pass the mark in the coming days.

Some people are embracing the competitive aspect of gaining followers, while others are shunning it. A rising contingency is even speculating on whether Twitter should remove the follower count. I personally doubt Twitter will remove the follower count, because it’s getting a lot of publicity for Twitter and it’s driving new users to them. However, I think a viable option would be for them to give users an option to HIDE their followers. I would actually like that.

This one surprised me a little because it seems like everyone and their mother has thousands of followers. But it appears that those are just the ones who are getting all the attention, while the average Twitter user has a pretty small following. According to Joel Comm’s book Twitter Power, you only need 80 followers to be in the top 10% of all Twitter users.

Of course I got some flak for the way the question was worded. And admittedly I wanted to support my theory that most Twitter users aren’t paying attention. But now that I’ve immersed myself in Twitter in recent weeks, I’ve come to a better understanding that you’re simply not expected to pay attention to everyone you’re following.

If you’re following thousands of people, it’s physically impossible to read every tweet unless you make it a full time job. And even if you’re following a modest number of folks, it may be too overwhelming to read all their tweets.

Instead, I think the basic concept employed by most users is to glance at the stream of tweets coming from your followers, to sort of “take a pulse”, and to interact as time permits. In observing several popular Twitter users, it seems they pay the most attention to their “@ replies”, and are much more likely to respond to an @ reply than to get involved with random tweets.

So next I asked the question that I was really burning to ask.

Are the majority of Twitter users really follower-whores? Are they all pursuing a big following to stroke their own egos? OK, I didn’t word it quite like that… 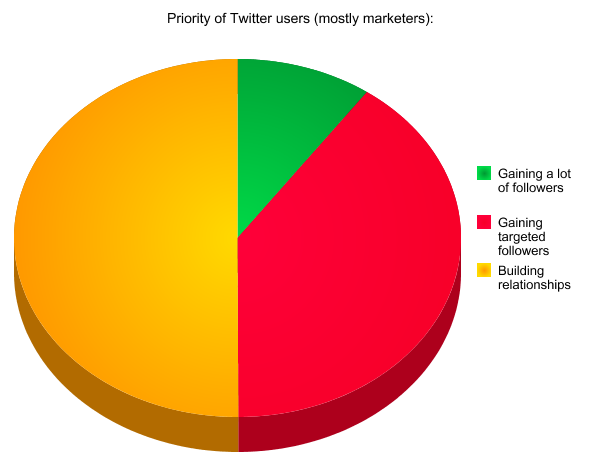 This one blew me away. I really thought more people would be primarily interested in growing the size of their following. Either I have a bunch of humble people on my list, or a bunch of smart marketers.

181 comments on “The State of Twitter: Thriving but Not for Everyone”

Over 80,000 people have already subscribed! Read their testimonials...

BLACK FRIDAY AND CYBER MONDAY SOFTWARE SALE FROM ME AND MY PARTNERS: