Is it just me, or is the number of internet marketing giveaways multiplying weekly? 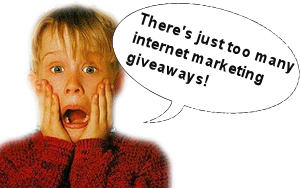 It’s really getting a bit overwhelming, but as they say…

That’s just what I did, and it’s working. I’ve been getting many new Eric’s Tips members in the last few days from some of these giveaways. I’d like to give a big welcome to those folks.

Unfortunately, with dozens of giveaways springing up this season, I’ve noticed the quality of these events going down the tubes.

As if it wasn’t enough that these “internet marketing carnivals” were already hype-filled greed-fests, with every marketer vying for the most new subscribers…but NOW we also have to deal with inexperienced marketers who are ill-prepared to pull off this kind of event successfully.

I am actually hoping the result will be that we all become more jaded toward giveaways, and the market will demand a higher level of quality in order to be successful.

I’ve checked out several giveaways in the last couple days, and I’d like to report one that’s worth joining, one “maybe”, and two that are probably not worth your time…

1) The Viral Marketing Giveaway. This one is being held by a fellow Eric’s Tips member, Brett Ingram, so it would be cool for you to take a look at it. This is Brett’s first giveaway event, and I think he did a nice job on it. There’s a nice one-time offer too. The giveaway is only open for 5 days, and if you miss it you’ll have to pay if you want to get in…

2) Download Free Gifts. This is a pretty big giveaway being held by Alan Spence. It’s a little weird though because the site says the promotion has started, but his one-time-offer does not seem to be working (so there’s no way to make a commission from it, although the site says there is). So I’d give it low marks for execution, but the content is pretty good for a giveaway…

3) The Ultimate JV. This is an interesting giveaway being run by Richard Monssen. Supposedly you can still become a partner and contribute your own product. Unfortunately, I can not recommend it, due to some technical issues. I submitted my own contribution and it was approved, but it still has not appeared in the listings. Also, the affiliate link is weird… sometimes it goes to a blank one-time-offer. It seems like he should have put that part of the site together before going live. Lastly, I got an email from Richard yesterday that said…

Well first i will start with the bad new’s first….we exceeded our bandwidth…all 5 gig’s of it….and was offline for about 12hr’s yesturday….to make sure this doesn’t happen again i have now tripled it…!!

My brother-in-law will attest that I almost fell off my chair laughing when I read that. Moral of story…don’t try to pull off a massive giveaway when you only have 5 GB of bandwidth. I don’t really understand… you can get like 100GB/month for $10 these days. And if you exceeded 5GB, 15GB doesn’t sound like too safe a number considering the heavy promotion hasn’t even hit yet 😉

4) 10 Days of $10. OK so this one’s not exactly a “giveaway” but I’ve seen a good deal of hype about it during the last couple days, so I decided to check it out. Jason DeVelvis seems like a decent marketer, and the site was nice and clean, but I was not impressed with the content at all. Although the sales letter says otherwise, the items seem like the same stuff you can get for free in the giveaways. I know for a fact I’ve seen some of the $10 items for free elsewhere.

I’ve said this before, but keep in mind that the person who benefits the most from these type of giveaways is the person who is running the giveaway. They are able to grow a huge list of members in a matter of days or weeks.

As much as I am starting to resent the overabundance of giveaways, I might just have to do my own giveaway one of these days 😉

As always you can leave comments here in the blog.

49 comments on “Internet Marketing Giveaways – There’s Just Too Many Of Them!”